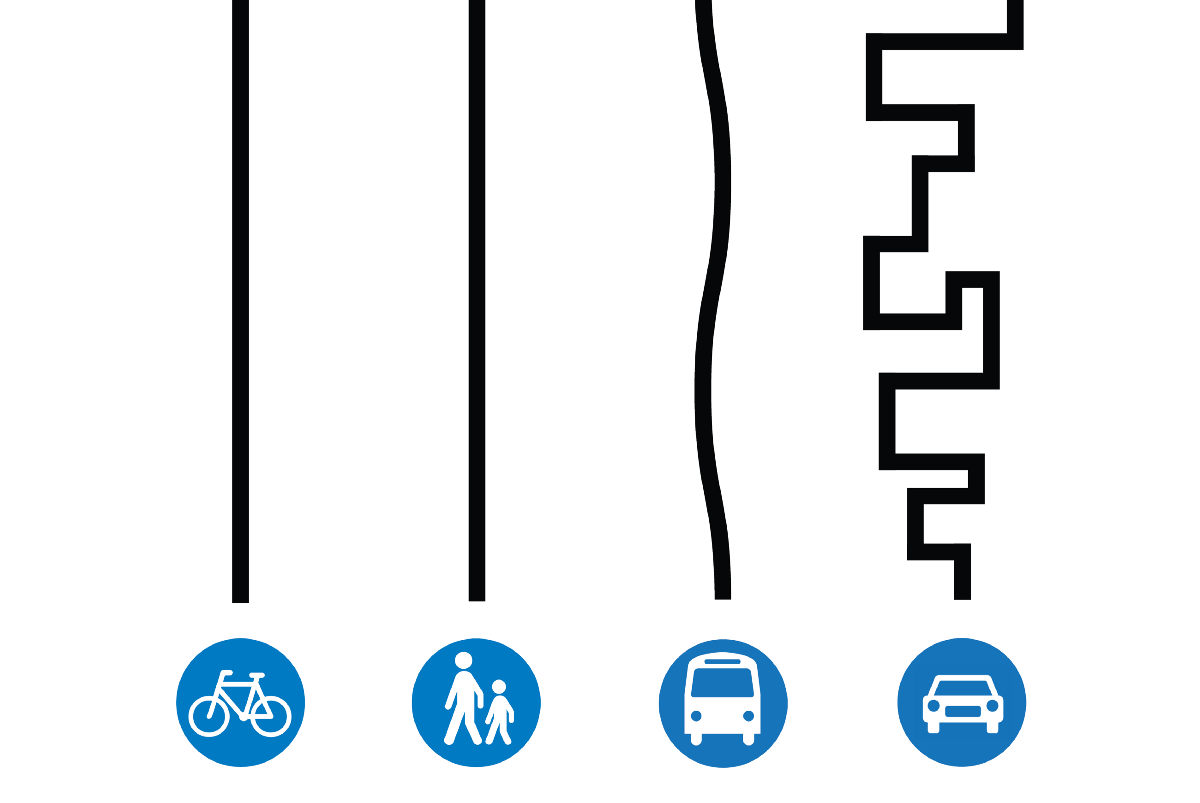 Copenhagenize: The Definitive Guide to Global Bicycle Urbanism by Mikael Colville-Andersen
My rating: 5 of 5 stars

Copenhagenize is one of the most aspiring books I’ve read on cycling although I must admit I have read only a few. I am a vivid all-year cyclist for quite some time now. I don’t own a car and travel exclusively by bike and train, which is quite unusual, I would say, in my home country Slovenia.

The author of the book, Mikael Colville-Andersen, has important experience in what he calls bicycle planning, strategy, infrastructure design, and communication. But, what initially made me a little bit suspicious, Colville-Andersen approached the subject matter with fresh eyes, “unencumbered by academic indoctrination”, as he says.

The book is divided into three main parts—Introduction, The Learning Curve, and The Toolbox— with altogether 20 chapters, plus Introduction and Conclusion. If there’s one thing that this book wants to turn around is one lesson. Namely, Colville-Andersen claims that the saddest irony of urban planning from more than a hundred years of traffic engineering is that “if you make more space for cars, more cars come.” So, this is a book that shows that there there’s more to a city than only its car-centric planning.

The introductory part of the book has five chapters. It’s an entertaining reading with some arguments on the general pearls of wisdom in life. What was before or what is the fourth basic need in life, sex or storytelling? Colville-Andersen goes for the latter, with an argument that listening or telling will bring us anyway toward having sex with someone. Well, Colville-Andersen is a communication professional and there is no hiding that he wants to sell his services too, so we should be careful in buying his arguments. Where by no means I’m saying that his arguments aren’t true, on the contrary.

In this first part, Colville-Andersen goes into the history of city and street design in particular, including the role traffic engineering has played in all. He found out that radical engineering—on a premise that the car is the glorious vehicle of the future—began in the 1930s and 1940s in the USA and has traveled around the world since. What is really surprising is that traffic engineering hasn’t changed much since. Or at least this is what Colville-Andersen claims. Instead, he invites us to imagine a designed bicycle infrastructure, that is like a well-designed chair. We would need to be and feel safe with the bicycle infrastructure in our cities. Amen to that.

To me, it seems impossible and incredible that in recent history there were massive demonstrations in Copenhagen in 1979 demanding safer cycling conditions. And demonstrations in San Francisco in 1972 seeking a dedicated bike line. The bicycle is the ultimate democratic symbol. Also in Slovenia, where there were ongoing demonstrations, every Friday for two years or so, of “cyclists” against the former government. Yet, Colville-Andersen is more than right to notice that there is a car-crash 9/11 every single month around the globe, and yet there is “no war on this particular terror.” Although the big auto industry is trying to reinvent itself as a “mobility companies”. The number of killed and seriously injured (KSI) is stable. Electric vehicles are a welcome solution, but we all know, in themselves, they—together with self-autonomous vehicles, that bring with them additional problems—”still occupy an arrogant amount of urban space.” Colville-Andersen is furious that responsible organizations are not taking any action in the direction of drastic reduction of cars that would be only measure to save lives in his opinion. Could not agree more. It is heretical to even think or say this thought out aloud, particularly in car-centric countries, as is Slovenija, for example.

Colville-Andersen has gathered health warnings from cigarette packaging and converted them into car-related health warnings. I’m quite curious what would that cause if some countries would implement them.

Colville-Andersen ends the introductory part of the book with a proposal or present solution for the 30 km/h speed limit in cities and towns. What started as an experiment in the small German town Buxtenhude is today’s baseline speed in more than 100 cities in European Union. Encouraging.

The second part of the book starts with the chapter on the city of Copenhagen case. The city had its cycling peak in 1949, only to start dismantling it to make space for cars. During the after second world war period, Copenhagen experienced a complete transition to a car-centric city, including the removal of the city’s tram network to be replaced with buses. The process of more safety for cyclists in Copenhagen started a few years after the massive demonstration in 1979, in the 1980s, only to be accelerated in the 1990s. Today, in Copenhagen at least (and in other progressive cities), cyclists are not the autists of the current transportation system. Still, in 2016 Copenhagen allocates a “whopping 64 percent of its transport space to cars”, including car lanes and parking spots, even though 91 percent of Copenhageners don’t drive a car daily when heading for work or to school.

Out of his consultancy work, data gathered, and his experience as a cyclist, Colville-Andersen gives much-appreciated advice in his book. For example, the bidirectional lines pose a much higher risk to cyclists than two one-directional lines do.  Or that narrowing car lanes in cities improve safety because drivers have to concentrate more. Or that riding a bike to the local train station, and consequently combining travel modes also increases bicycle share. Or that if you want to construct a new bicycle and pedestrian bridge, your starting point should not be stairs and elevators.  Infrastructure is definitely the key to increasing the cycling levels and influences behaviour simultaneously. And there is no chicken or egg. There is only infrastructure. While claiming that Colville-Andersen arguably kills several myths on riding only when flat, not riding when it’s hot or in winter, not used to cycle, cultural things, expensive cars, no space for bikes, too few cyclists, what all you supposedly can’t do on a bike, it takes to long. As the counterargument for the latter myth that it takes too long to promote cycling, Colville-Andersen cites the case of a visit of Ljubljana planners at the peak of the cold war to Copengahen only to return to Ljubljana and implement 40 kilometers of “Copenhagen- quality cycle track”. Cycling levels supposedly rose from two to ten percent in a year.

Colville-Andersen concludes the second part of the book with an explanation of how to make cycling desirable and how to gather data about it. It is most easily depicted in the two infographics, presented in the book. The first one presents the short history of traffic engineering from the 1800 to present, and the latter one presents the Copenhagenize (also the name of the authors’ agency) Traffic Planning Guide. Worth incorporating into every city, in my opinion.

Regarding the data, Colville-Andersen is firmly convincing, due to the time and again proven fact that investing in urban cycling is absolutely feasible. The fact is that urban cycling is “the most cost-beneficial transport form we have ever invented.” The statistics show that every time I ride a bicycle for a kilometer, I put 26 cents right back into society. In the words of Colville-Andersen, “Pure profit, man.” On the other hand, “every time someone drives a car one kilometer, we pay out 89 cents.” In Copenhagen, every kilometer of a cycle track pays off in five years. What an astonishing business model, says Colville-Andersen. In Denmark, there is even a tax break of 32 cents per kilometer if “my cycling commute to work is 24 kilometers or more”, with a proposal to lower that distance to twelve kilometers.

The third part of the book is titled The Toolbox. It has six chapters and a conclusion. Here Colville-Andersen presents some of the best practices for the cycling infrastructure. The unwritten standard for the cycle-track width is “that you and I can cycle together, having a conversation, and a cargo bike can pass us by.” I have yet to witness such a width of cycling track in my home country, Slovenia. At the end of the book, Colville-Andersen goes into advocacy issues. Among others, argues heavily that cyclists are not a kind of subculture. And that someone who knows how much its bicycle weight is not supposed to be someone who should be advocating cycling. Fair enough, at least not exclusively, if you ask me.

Colville-Andersen concludes the book with a quote from the Mayor of Paris from 2002 to 2014, Bertrand Delanoë, that cars no longer have a place in the big cities of our time. It’s true, in the times of the greatest waves of urbanization, “if you don’t see cycling as part of the solution, you are part of the problem:” We should all think about that at our next elections and vote only those that have a track record or at least the intention in remaking our cities not only cycling-friendly but cycling-oriented spaces.

This book is not only very well written but it also has a logical structure and design and most of all really lots of photos that tell a story of their own. You can tell that Colville-Andersen started his cycling story as a photo blog Cycle Chic. which is still available and occasionally updated. From my point of view, I could not find any book weaknesses. Colville-Andersen is very direct and he doesn’t come from academia but runs a consultancy and in that terms, this book is also a promotion of his work, in my opinion, more than necessary work.

View all my reviews

[WHO/Europe] Sustainable and active mobility is the new normality

Letter from the Institute’s Director